Warriors of the Storm is the 9th entry in The Saxon Stories series that follows Uhtred of Bebbanburg and it is my favourite of the books so far. It has a brilliant opening and the standard doesn’t drop for the length of the whole book. 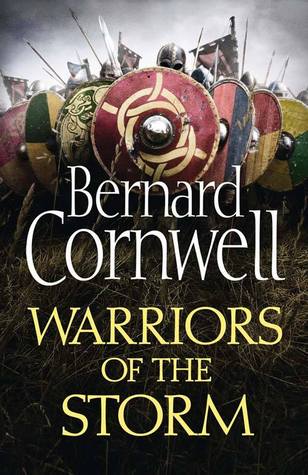 At the beginning of Warriors of the Storm, a fifty-something-year-old Uhtred is residing at the stronghold of Ceaster. Mercia seems to be thriving under the rule of Æthelflæd. Things have been tranquil and peaceful for a couple of years but now a new threat is on the horizon. The fierce warrior Ragnall Ivarson leads an army and he has his sights set on both Mercia and Northumbria. Ragnall is a leader of repute and for all intents and purposes, a man to be feared. To make matters more interesting, he is also Uhtred’s son-in-law’s brother

“Ragnall Ivarson. I had never met him, but I knew him. I knew his reputation. No man sailed a ship better, no man fought more fiercely, no man was held in more fear. He was a savage, a pirate, a wild king of nowhere, and my daughter Stiorra had married his brother.”

Being the ninth novel in the series, a lot of what is presented here has been seen before throughout these tales. Battles, skirmishes, shield-walls, formidable opponents, intelligent tactics, and quality side characters (both seasoned and new). Alongside The Burning Land and The Last Kingdom, Warriors of the Storm, for me, is a perfect example of Cornwell’s formula. The formula seems to be working on me though as I have read all 9 of these books so far this year. With them all being 300 or so pages and enticingly devourable within 3-4 days I may very well finish this series this year, timing it well with the imminent release of the final novel War Lord. I have rated all of the books 3-stars and above.

“I was Uhtred, Lord of Bebbanburg, in my war-glory. The arm rings of fallen enemies glinted on my forearms, my shield was newly painted with the snarling wolf’s head of my house, while another wolf, this one of silver, crouched on the crest of my polished helmet. My mail was tight, polished with sand, my sword belt and scabbard and bridle and saddle were studded with silver, there was a gold chain at my neck, my boots were panelled with silver, my drawn sword was grey with the whorls of its making running from the hilt to its hungry tip. I was the lord of war mounted on a great black horse, and together we would make panic.”

Although ageing, Uhtred is still formidable, imposing, often stubborn, Thor-following, battle-ready, and fiercely intelligent. He is renowned across the land. It’s a joy to follow Uhtred’s first-person perspective as an even older Uhtred tells the reader his tales. His family is extremely important to the narrative here and some of his children have become stars of the cast too. There is a brutal and tragic moment that features one of his family members and it definitely plays with the heartstrings.

In Warriors of the Storm, we find out about more about fan favourite Finan’s past with their being an important Irish presence in this story. These parts made me love Finan even more. He is of a similar age to Uhtred but still possesses unrivalled speed with a blade. Other ageing characters who were first featured at the very start of the series in our narrator’s younger days play important parts here too. I adore stories where we follow a character from youth for their whole lives. Alongside the narrative of FitzChivalry Farseer in The Realm of the Elderlings, the tale of Uhtred is the finest I have ever read where we follow a character for 50+ years.

Warriors of the Storm is another brilliant example of Cornwell’s historical fiction. My line up of reviews for October and November features some of the most anticipated reads in science fiction, fantasy, and horror but I’m sure I will sneak another couple of The Saxon Stories books in between as they are criminally addictive and feature a lead whose escapades I just want to read more about.

“It is not difficult to be a lord, a jarl, or even a king, but it is difficult to be a leader. Most men want to follow, and what they demand of their leader is prosperity. We are the ring-givers, the gold-givers. We give land, we give silver, we give slaves, but that alone is not enough. They must be led. Leave men standing or sitting for days at a time and they get bored, and bored men make trouble. They must be surprised and challenged, given tasks they think beyond their abilities. And they must fear. A leader who is not feared will cease to rule, but fear is not enough. They must love too.”

Read Warriors of the Storm by Bernard Cornwell