An exciting debut by a new fantasy author, We Break Immortals by Thomas Howard Riley held nothing back and left me eager for more. Everything is dialed up to eleven, and nothing is certain. 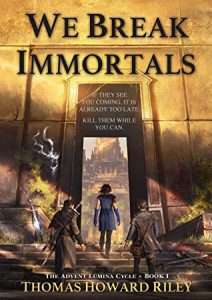 The book follows multiple characters as they try desperately to prevent a demented serial killer from becoming, in essence, a god. He is one of the baddest of big bads that I have read recently and taking him down is a nigh-impossible goal. The characters are all fighting their own battles, however, against themselves. The question is: how can they defeat a powerful villain if they can’t even defeat their own personal demons? These battles that the characters fight against themselves are what kept me riveted.

Aren is a Render Tracer, otherwise known as a “glasseye”, meaning someone who can see traces of magick remnants. He does this with the help of some special tools. Aren uses his gifts to track down magickusers gone rogue. The magick in We Break Immortals is incredibly well-developed. It’s complicated and could be confusing if not for the use of Aren to show how everything works. Thankfully, it is explained in a way that makes perfect sense. Aren is very good at what he does. He is also an addict, which elevates his character from interesting to incredibly nuanced and complex. He is his own worst enemy, a fact that is made extremely apparent throughout the book. I love books that have characters with inner struggles and hidden obstacles to overcome.

Keluwen is a walking timebomb. She’s angry, she’s snarky, and she doesn’t take crap from anyone. She’s also a magickuser, which complicates matters when both her crew and Aren–a glasseye who goes after people like her–end up crossing paths. The dynamic within her crew was always interesting, especially her relationship with the crew’s leader.

Lastly, there’s Corrin. Ah, how I loved Corrin! Rougish with a knack for attracting trouble, he nonetheless manages to have his own sense of right and wrong. Corrin is the sort of person who does the best he can with what he has. And what he has is a fair amount of luck (whether it’s good or bad, I’ll leave to the reader to decide), a long list of vices, and a liberal dash of derring-do.

The world was well thought out and brought to life. More than just a backdrop for the storyline, the amount of development that has gone into the world makes it almost a character in its own right. The history, and mythologies are fascinating and it just keeps building.

We Break Immortals has heart, humor, excellent characters, and violence aplenty. It’s the sort of book that plunges in and never stops to let you catch your breath. It is, in a word, badass.