We’ve all heard the phrase, “don’t judge a book by its cover,” and I’d have to say this is good advice. The best artwork in the world won’t make a story engage the reader. What a great cover can do is catch the eye and stand out in an unending sea of books. We Men of Ash and Shadow did this for me, as one evening I was scrolling through social media and my attention was caught by the wonderful book cover. This got my attention enough to read the blurb, and I was immediately hooked.

“It was the most highly recommended venue the city had to offer. It was called the Ring O’ Bastards and it had the lowest patron to murder victim ratio in a five mile radius.” 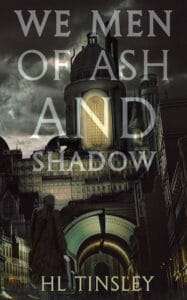 That’s the opening paragraph to this fine novel. Within moments, I knew I had stumbled on something special. HL Tinsley didn’t disappoint me as I read further. Right away we are introduced to the protagonist of this novel and the Vanguard Chronicles series. We see Vanguard in his element and given a quick snapshot of his typical night on the job.

John Vanguard is a former soldier, now a mercenary employed to do unsavory but necessary work for the city’s warlord, Sanquain. He’s disgruntled by his life and shamed by the disastrous ending to his military career. As Vanguard doesn’t have much self-respect, he feels he deserves the rotten path his life has taken. But he has unique skills, and Sanquain recognizes that and puts him to grim work.

“It was as though the rats of the city could smell the blood before it hit the cobblestones.”

Soon Vanguard is tasked to learn who has killed two city guards whose bodies have washed up. As he conducts his investigation, he travels the city’s underworld and soon learns much more than he expected. While the criminal elements are as much a part of the city’s darker side as they are in any sizable community, Vanguard discovers that this city is on the edge of collapse, and revolution is looming, just waiting on something to push it over the brink.

Meanwhile, a young aristocrat named Tarryn Leersac has fallen on hard times as his family fortune has been chipped away. He stumbles upon Vanguard and recognizes that the man has skills that mirror his own. Tarryn decides that he must have Vanguard mentor him, to teach him how to control and properly use these talents, hopefully to regain his noble position in the city.

“’We are men of ash and shadow. We endure the darkness so that others might see the dawn.”

We Men of Ash and Shadow takes us through this remarkably fascinating underworld of crime and survival, showing the darker side to the human experience, but also carving out a path to possible redemption. It’s a brilliant debut from a new author to the grimdark scene, and I look forward to seeing more of her work, rather in continuation of this series or other things.

Read We Men of Ash and Shadow by HL Tinsley

Book launch, reviews and a little something for your mind – HL Tinsley