There are quite a few books inspired by Peter Pan coming out this year. While most of them are on the YA end of the spectrum, Wendy, Darling by A.C. Wise is the grown-up answer to the children’s story. In this version, Wendy is an adult, with a husband and daughter of her own, when Peter suddenly reappears in her life. Having spent years of her life in a mental institution thanks to her insistence on not forgetting Peter and Neverland, this Wendy is not the jolly girl that Disney presented us with – she has deep-seated trauma, and her relations with her brothers are strained. 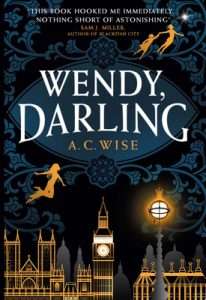 The life she has so carefully built for herself in early twentieth-century London, with a mostly platonic marriage to a man who respects her, a daughter she adores, and her Native American friend Mary, whom she met in the asylum, is completely disrupted when Peter Pan appears, and kidnaps her daughter Jane. Insisting that Jane is Wendy – he refuses to believe that Wendy could have grown up – Peter takes her to Neverland and wants her to look after the Lost Boys there. This leads Wendy to confront her past and return to Neverland to save her daughter. But Neverland is dying, Peter has lost his ways and both Wendy and Jane keep finding the cracks in Peter’s world.

Wendy, Darling is a dark take on a familiar story, dealing with mature themes such as psychological abuse and complex mental health issues. It is also a gripping tale of family and friendship, of the value of growing up and following your dreams. This is a story that will absorb you and pull it into its world immediately. The worldbuilding is rich and the characters are explored in detail. It is compelling, and the plot is quite fast-paced, which suits the story and characters well. I particularly thought that the complexities of Wendy and Mary, both as individuals and in their relationship to each other, were developed really well and I enjoyed learning about them and trying to puzzle together the story as it unfolded.

If you like your retellings mature and on the darker side, I very much recommend you pick up Wendy, Darling. It has vibes slightly reminiscent of Christina Henry’s Alice books and relies on making the reader uncomfortable throughout to tell the story. It’s not as whimsical as I might have expected, but I still really liked it.