When Gravity Fails by George Alec Effinger is a classic novel of cyberpunk and one of the foundational texts of the genre. Whenever you think of the word cyberpunk and imagine a gritty neon landscape of crime, sex, drugs, and cyberware then you might be thinking of Neuromancer, but you also might be thinking of the Budayeen. Or, if you’re not, then you might want to check out this book because it’s so fantastically written. Not all of it has aged well in the years since its release in 1986 but some of it was way ahead of its time. 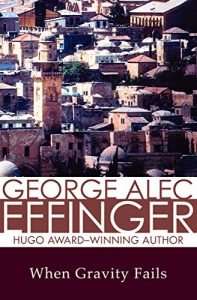 The premise is that the Soviet Union and America have both fallen in the wake of the Cold War, not due to nuclear war but economic collapse. In the aftermath, the Middle East and Europe have risen to fill the cultural gap. In a nameless city in the Levant, probably Damascus, the Red Light district is known as the Budayeen. Every vice imaginable is catered for to customers, including the opportunity to use “Moddies” and “Daddies” to upload to your brain.

Moddies will give you skills like the Matrix be they kung fu, different languages, or an understanding of European history. They will also vanish the moment you pop out the disk. Daddies are more insidious in that they give you an entirely new personality. You can be anyone from James Bond to Jesus. I like this kind of exploration of hypothetical technologies.

Living in the Budayeen is Marid Audran, a small-time grifter who is enjoying life as a man independent of the larger criminal underworld ruled by “Papa” Friedlander Bey. He is presently hooked up with a sex worker named Yasmin (one of the many trans characters in the book) and seems to have a handle on things. Well, except for the fact he’s a drug addict and terrified of being cybernetically upgraded. Either way, he thinks of himself as independent, and this gets him involved in two cases that summarily end with his clients horribly murdered. From there, his life goes on a steady downward slope that gets him involved in international intrigue as well as dealing with a serial killer.

When Gravity Fails is the kind of filthy, gritty, neo-noir cyberpunk that I am fond of. It is steeped in sex, violence, and moral ambiguity with no one remotely clean. Marid Audran is a classical antihero who must be dragged kicking and screaming into the plot because he’d rather not risk his life even to avenge the death of a friend. This is exactly the kind of adult science fiction that fans of this magazine’s genre would find themselves loving. I also really liked the fact George Alec Effinger chose not to make this a world of “Asia takes over the world” like so much cyberpunk but went down the road less travelled.

The Budayeen is an incredibly well-realized location and it’s obvious that the author drew from his own experiences in New Orleans’ French Quarter and many stories from there to help flesh out the fantastic collection of characters therein. They’re the kind of oddball eccentric cast that sticks in your mind yet never seems unbelievable. No one is particularly likable, being a dangerous collection of thugs as well as con men, but no one is boring. This is certainly the kind of place you’d want to visit if not stay, assuming you had enough money to burn.

I also feel like the author’s research into Arabic culture is shown, highlighting both minutia as well as well-life compromises with both religion as well as taboo. Marid is not a devout Muslim but deals with many others who range from fundamentalists to hypocrites to genuinely faithful. Which is a very roundabout way of saying that it doesn’t just feel like the Western world dumped into an exotic location either, 70s New Orleans influences or not. It’s more than just a sleazy R-rated cyberpunk Casablanca but you could do that story here too.

There’s some issues that should be brought up for anyone who wants to dive into the seedy world of the Budayeen. Violence is horrifying, sexual assaults occur [off camera], and the handling of certain identity issues is not entirely accurate. George Alec Effinger was a progressive and included many trans characters in his works but most of them are sex workers as well as not quite having a modern idea of the psychology involved in gender transitioning (it was the 80s). Marid also uses quite a number of self-deprecating racial slurs about himself that may put off other readers.

However, if this is something you’re willing to overlook or consider it part of the world-building then this is a hearty recommendation. It is also followed up by two sequels. It’s a shame George Alec Effinger died before he could finish his fourth book in the series. Few people seem capable of making a world like this leap off the page as he did.