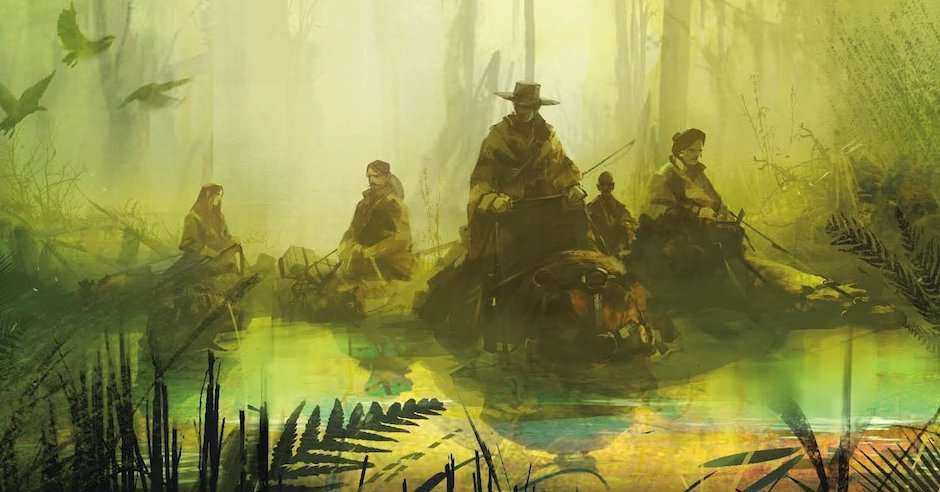 Feeling a bit nostalgic and listening to A Change of Pace I thought to myself, “yeah, I need a change of reading pace. It’s time to do more short reviews of short fiction. Bring on the novella! ” This time I’ve gone a little berko on the Tor.com novellas for the most part. I’ve grabbed Pieces of Hate by Tim Lebbon (which came with Dead Man’s Hand so I reviewed that, too), Dead Man Walking by Jeremy Szal, River of Teeth by Sarah Gailey, FALL by J.P. Ashman, and Return of Souls by Andy Remic.

Doug is a common storekeeper in Deadwood. Life is monotonous and boring. And then Death rode in on a pale horse, and Doug’s interest was piqued.

A story of a man dipping his toes into the gods’ pool and then being thrown in the deep end. Harsh and gritty, with the image of Clint Eastwood firmly implanted in my head as the gunslinger Gabriel, this is an enjoyable novella with a clear frontier feel, and some brutal fights. The secondary character Gabriel makes this story, the depth and age of his pain, his grit to just keep walking towards death, and his knowledge that he must do what has to be done for more than just victory in the moment. Things tend to happen to, as opposed to being driven by, our protagonist Doug which would be bad for a novel but kind of works in this format as everything happens so quickly it’s like all Doug can do is hold on and hope he’s still breathing on the other end of it all.

Pieces of Hate (The Assassin book 2) 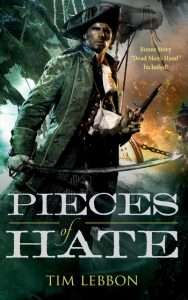 In the ebook version of Pieces of Hate I picked up we now switch to Gabriel’s point of view—something I’m damned excited about. Gabriel boards a privateer to cross the ocean to Port Royal. Word is Temple might be there. He’s just got to survive the voyage, first.

A pretty fun read full of menacing pirates, dangerous words, haunting memories of happiness corrupted, and bloody action. I don’t want to spoil the novella, but by the end I knew what was going to happen and it was a bit meh to wrap up an awesome journey.

Ray and his power-Armoured fireteam approach a town to get information on settlements trying to cut themselves off from the Union. But it’s not the locals Ray has to be worried about.

This excellent SF short story is fast paced and engaging. The camaraderie in the fire team is built as quickly as the desolateness of the setting and the bleakness of soldiering life as a conquering settler. The twist at the end is fun, wrapping up the story in a satisfying manner while leaving room for plenty more.

Check out Dead Man Walking for free over at Abyss & Apex. 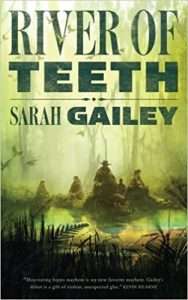 Winslow the hopper (person who trains and rides hippos like they were horses) gets the nod for a massive paying job, puts together a dubious (at best) crew, then calls in a favour from an old hopper friend. Archie, conwoman / hopper extraordinaire accepts the request for favour. The final parts of their crew are a retired demo expert who will do anything to break the boredom of retirement, the most feared contract killer alive (who is heavily pregnant), and the fastest gun in the West. Together, they are to fix a feral hippo problem in a dam named The Harriet, where the Mississippi used to be. It’s a legitimate government contract with legitimate pay. What could possibly go wrong?

Just bloody excellent. Five stars. The very fucking cool alternate history world; the magnificent and engaging characters; and the thoroughly enjoyable plot—this novella has it all and more. I can’t recommend it highly enough and I can’t wait to read more Sarah Gailey. 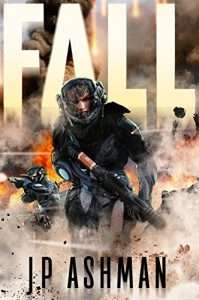 A broken soldier getting back into the fight after a horrifying drop (“fall”) from the Platform to the planet surface nearly killed her. The memories of brutal combat– of drones and aliens and the destroyed bodies of her friends–haunt her every waking moment. She needs to find courage, to do what must be done for her people, and to face her memories for them. Fall is a wild sci-fi ride full of action.
Our protagonist Tal is engaging, her PTSD and her fight to find her old courage to do her job is presented in a way that felt fluid and believable to me. The secondary characters are a bit less 3D, but I didn’t mind that for this length story.
The thing Ashman has done brilliantly in this short story is skim the surface of his worldbuilding, his caste system and political / religious divides (plenty of perspective and grey moral areas to work with in there), and the greater threat to the world without being hamfisted. It’s deftly done and leaves me genuinely hoping we get more stories or novellas, whether they are about Tal or not.
My only other criticism is that a few sentences could have been tightened up here and there. Other than that, excellent.
Highly recommended with plenty in there for Grimdark SF fans to love. Grab your pre-order asap. 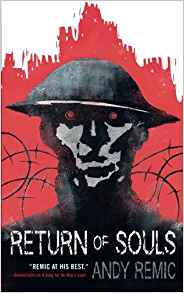 Jones is back, bereft of friends, terrified of inhuman foes, and trying to survive the 3rd battle of Ypres. Remic is so good at creating a horrific vision of the front—of hopelessness and horror, of surrender and grit, of the randomness of death when a million people are trying to kill you in a million different ways.
A fun book, with a big mid-novella twist and a constant sense of foreboding, Return of Souls gives fans of this series more of what we loved about A Song for No Mans Land, and then turns up the fantasy dial. For me, Song was a better read, but this is a solid follow up.