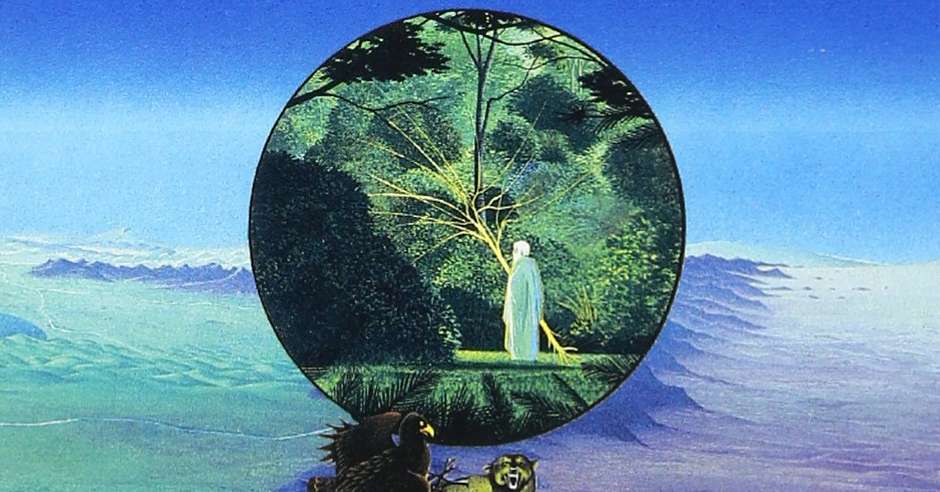 Stephen Donaldson’s The Chronicles of Thomas Covenant, The Unbeliever is an epic fantasy trilogy first published in 1977. Its titular main character, Thomas Covenant, is from a 20th century town in our world. He’s a leper, and eventually he’s going to lose his limbs, his sight, and the feeling in his nerves. His wife has divorced him and the townspeople have gone so far as to home deliver his groceries so he doesn’t come near them. Just when it seems things couldn’t get any worse, he’s then kidnapped by magical means and transported to the mythical world of the Land. There, his possession of a white-gold wedding band results in him being seen by the ruling authority, the Council of Lords, as the only man who can save the Land from destruction by the evil Lord Foul.

The Chronicles of Thomas Covenant is infamous for one polarizing scene: Shortly after his arrival in the Land, Covenant befriends a beautiful young girl. Overcome by the Land’s rejuvenation of his leprosy-deadened nerves and believing he is trapped in a hallucination, he rapes her. From this early point in the trilogy, it is clear that Thomas Covenant is anything but a typical hero.

The Craft of That Scene

Donaldson is very careful not to glorify the rape scene that forms the defining moment of Covenant’s character. He very subtly shifts the point of view (POV) away from Covenant and into the POV of Lena, the victim. ‘But even as she cried out she knew that it was too late for her. Something that her people thought of as a gift had been torn from her.’ We are meant to identify with the victim’s sorrow during this scene, not Covenant’s lust. It is deftly handled, and allows Donaldson to avoid making the scene gratuitous. Donaldson reinforces the reader’s sympathy for Covenant’s victim when, the next morning, Covenant reflects briefly on the incident. ‘He [Covenant] did not think about Lena; he knew instinctively that he could not afford to think about her.’ Covenant’s lack of remorse is in stark contrast to Lena’s hurt. Clearly, it is the effect on Lena, not Covenant that is at the heart of the scene. Many crime novels such as Thomas Harris’s Red Dragon intercut scenes from the killer’s POV for a similar effect. In those scenes, we don’t need to strictly identify with the killer. Such scenes are often driven by conflict or by sympathy for the victim. Donaldson’s shift in POV assists our moral judgement to stand objectively removed from Covenant’s act.

Later in the novels, however, Covenant’s act has serious repercussions. Unknown to him, the rape results in a child, Elena, who goes on to become one of the High Lords who rule the Land. Due to the time differential between the Land and Earth, she is in her thirties when Covenant returns to the Land after an absence. Covenant certainly professes remorse for the rape with such lines as ‘I wouldn’t do it again – attack a girl like that. I would take it back if I could.’ But we are always wondering how honest these self-recriminations are, especially in light of his apparent sexual attraction towards Elena.

Perhaps what makes Covenant so enduring is that he is a conflicted character whose true motivations are murky, even to himself. Even the rape, an obviously despicable act, is committed while he is of the belief that the Land is a hallucination, so his moral responsibility and his motivation are made uncertain.

The Advantages of Being a Man of Moral Mystery

Morally grey characters such as Covenant are unpredictable. When a morally grey character controls the narrative, you can never be sure where the story will go. For example, no one is prepared when Covenant rejects an offer the intelligent horses known as the Ranyhyn make to him. ‘He could hear the amazement of the Ramen – amazement too strong for them to feel any offence at what he had done. He was beyond them; he could hear it.’ He even shows compassion for his earlier rape by asking the Ranyhyn to treat his victim to a visit from them once a year. He’s doing the unexpected, and no one can predict precisely what he will do next.

Ultimately, the fate of the entire Land depends on Covenant’s unpredictable moral choice about whether or not to be its saviour. Early on, the lords of the Land sing to Covenant a song containing the following lines:

But Covenant is also morally ambiguous in another way: his motivations for doing good are questionable. It’s like being nice to an elderly uncle solely because you want to get written into the will. Sure, your actions might be good, but your motives certainly aren’t. In the third novel, The Power that Preserves, Covenant vows to destroy Lord Foul, but his companion, Triock, calls into question his motivation. Does Covenant really want to kill Lord Foul to save the Land, or does he want to kill Foul because it will satisfy his own hatred?  Triock alleges that Covenant will ultimately fail because the Land will not be served by hatred. At the trilogy’s end, as Covenant struggles with the dilemma of whether to kill Lord Foul, Covenant himself thinks: ‘Anger was only good for fighting, for resistance.’ Covenant must grapple with the choice between satisfying his hatred or truly saving the Land.

To make matters even more complex, a morally grey character’s actions are often not true indicators of what’s going on in their head. That is, they lie, they cheat, they scheme. Thomas Covenant is certainly a liar and a schemer. He lies to keep secret the rape he has committed and even accepts the rape victim’s mother as his unwitting guide. He schemes to shift responsibility of saving the Land onto his daughter Elena’s shoulders. This lying and scheming often involves dramatic irony, which allows the reader to grasp far more of the situation than the characters themselves. Yes, lying and scheming makes for good entertainment. Just look at how Cersei and Tyrion in Game of Thrones are still around for season seven, but poor Ned Stark got beheaded in season one.

But Covenant is more than simply a liar and a schemer. He also has many decent qualities. He risks his life to save a young child bitten by a snake. He deeply misses his wife and his child. The moral complexity of his behaviour is similar to that of Jamie Lannister in Game of Thrones , who pushes Bran out a window, yet also returns to rescue Brienne of Tarth from the bear pit. We love morally ambiguous characters because of this inner conflict, because these characters are not what they seem, because they are not simple.

Why Covenant can’t be a Nice Guy

As story guru Matt Bird states: ‘The hero is the person who has the quality that everyone else lacks in this situation, even if it’s a quali