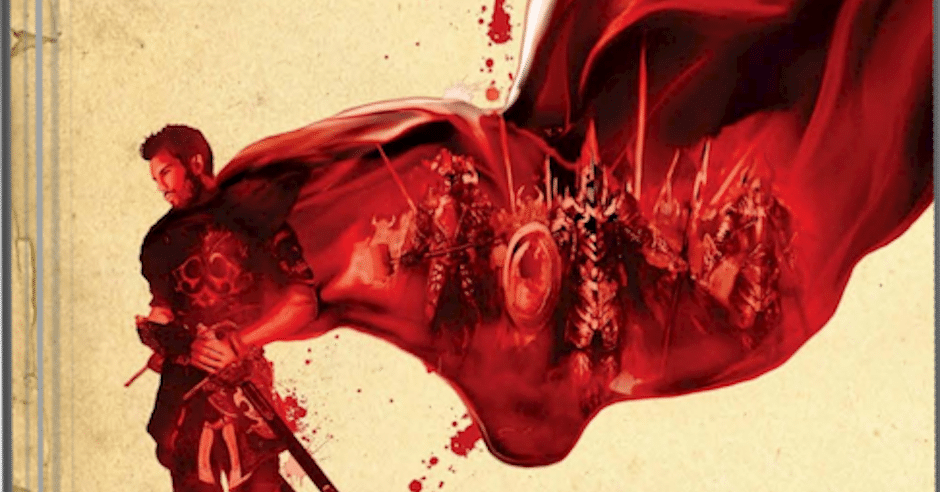 I will start this off by saying, Sebastien is a top guy, I’ve always loved meeting him at various events and was very much looking forward to reading Traitor’s Blade, the first instalment in The Greatcoats.

And I LOVED it! Really really loved it.

When you’re fighting a crowd, it’s good to shout potentially threatening things like “Crossbows!” or “Fire!” or “Giant Flying Cat!” every once in a while. 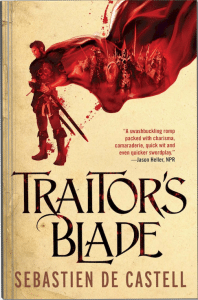 So, Traitor’s Blade is Sebastien de Castell’s first novel and has been immensely popular, for good reason. It is a tale of friendships, duty, trying to do good when everything else is down right evil, and swashbuckling duels. Lots of them. However, this is NOT a kissing book (for any fans of The Princess Bride).

Traitor’s Blade is Book 1 of The Greatcoats series, set in a world of dark deeds and political intrigue. Our main character and PoV is Falcio val Mond, First Cantor of The Greatcoats, all round clever clogs providing lots of wit and some pretty intense rapier duels. The Greatcoats are a fallen band of elite soldiers whose purpose was to serve the King and promote justice throughout the kingdom. But, the King is dead, the kingdom is run by various Dukes, the Greatcoats disbanded and are now known as ‘tatter-cloaks’.

I must have encountered the Duke somewhere on the road because I was carrying a sack with me and his head was in it.

We follow Falcio, along with his two fellow Greatcoats, Brasti, and Kest, as they attempt to carve their way through the depraved kingdom. It starts off at break-neck speed and it really does not hold up. It is such an intensely fast-paced book that you actually feel in a strange way the absolute exhaustion of Falcio as you turn the pages. There are no let-offs for this small band, nothing is easy and they have to employ every single weapon in their arsenal, every trick in their long book. All whilst providing some of the best witty dialogue I have read in fantasy.

The relationship between Falcio, Brasti, and Kest is the heart of this story, and is extremely enjoyable. Falcio, the leader and thinker of the group, Brasti the cocky archer and Kest the best sword-fighter in the land. They are a formidable trio. Those who say that these three resemble the Three Musketeers really aren’t mistaken. They have such a natural and fun camaraderie, where they make you laugh, smile and feel their pain as they fight together, argue, and get themselves into as much trouble as possible.

“My dear, not one man in a hundred can be a proper archer. And not one in ten thousand can become a master.”
“And you are one? A master archer, i mean?”
Brasti smiled and contemplated the nails of his right hand. “One might fairly say so, i believe.”
“One says so frequently,” I observed.

These last Greatcoats are constantly struggling to do the ‘honourable thing’ throughout, at odds with the traitorous world of thugs, knights, and dukes. The range and diversity of secondary characters is well used, with men and women adding to the mix, some that readers will love, others that readers will totally despise.

This story is grim in many ways. There is heightened violence and cruelty, with an environment that is unforgiving and backstabbing. There is one scene that went above and beyond the rest, while I understood why the author used it I still found it uncomfortable. Traitor’s Blade also has some awesome action scenes and set-pieces which gave all of the characters their individual times to shine. There were also scenes that hit hard on the motives and character building front where those with less martial prowess were able to have their moments for the reader.

The archer is the true weapon; the bow is just a long piece of wood.

5/5 – Traitor’s Blade is an accomplished and enjoyable read by the witty Sebastien de Castell. Full of fun and action, an intensely quick read that promises to give you characters that you love and hate, with as many twists and turns as a twisty turny thing. Enjoy!

Grab yourself a copy of this swashbuckling tale, and also, check out our interview with the author in Grimdark Magazine Issue #17.