Vampire fiction that doesn’t suck: Where to start reading

If you know anything about me then you know I love vampire fiction. Ever since I picked up Vampire: The Masquerade 1st Edition at the tender age of fourteen, I’ve been obsessed with the undead rulers of the night. I’ve written more than a couple of books about the undead myself with Straight Outta Fangton being my primary series. However, there is a lot of trashy vampire fiction.

That isn’t to say that vampires are themselves a concept meant to be reserved for the dust bin or guilty pleasures. It also isn’t to say that trashy fiction isn’t something that can be enjoyed for its own sake. I read at least one book of literary fiction per year. Every year, I also read a hundred books or more books that you could drive a truck through the plot holes of. Guess which I enjoy more?

Here are some of the best vampire books I’ve read and a good place to start reading if you want “good” books about the undead. It leaves off some gems and doesn’t include a lot of my favorites. However, if I were to dump my forty-years of vampire reading in your lap then you’d probably run screaming for the sun. 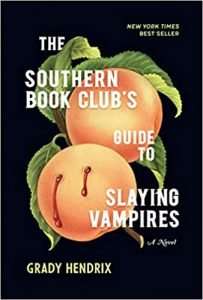 is a master of writing throw-back novels to the Eighties. One of these is a sort of Stranger Things for adults where a vampire comes to a small Southern town that reminds me a good deal of my own in the worst ways. The middle aged women have to deal with class and sexism plus their own privilege as the vampire predominately preys on the poor African American portion of town. A lot darker than expected and genuinely horrifying places.

You can read our review here.

Patricia Campbell’s life has never felt smaller. Her husband is a workaholic, her teenage kids have their own lives, her senile mother-in-law needs constant care, and she’s always a step behind on her endless to-do list. The only thing keeping her sane is her book club, a close-knit group of Charleston women united by their love of true crime. At these meetings they’re as likely to talk about the Manson family as they are about their own families.

One evening after book club, Patricia is viciously attacked by an elderly neighbor, bringing the neighbor’s handsome nephew, James Harris, into her life. James is well traveled and well read, and he makes Patricia feel things she hasn’t felt in years. But when children on the other side of town go missing, their deaths written off by local police, Patricia has reason to believe James Harris is more of a Bundy than a Brad Pitt. The real problem? James is a monster of a different kind-and Patricia has already invited him in.

Little by little, James will insinuate himself into Patricia’s life and try to take everything she took for granted-including the book club-but she won’t surrender without a fight in this blood-soaked tale of neighborly kindness gone wrong.