Vampire the Masquerade 5th Edition: An interview with Matthew Dawkins 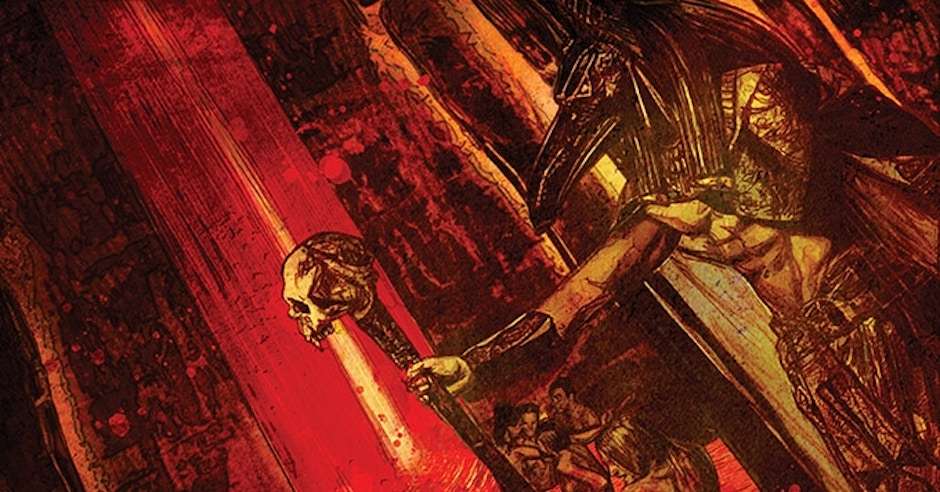 Today we have a special guest with Vampire: The Masquerade line developer Matthew Dawkins. Matthew Dawkins is a prolific game writer as well as producer of content with work across multiple game lines including his own, They Came from Beneath the Sea, which is a humorous spoof of 1950s Red Scare tropes and b-movie science fiction. 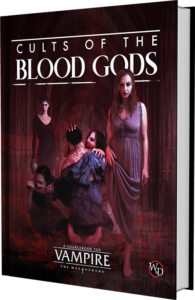 Readers of Grimdark Magazine know how big a fan I am of the 5th Edition of Vampire: The Masquerade released last year. I feel like it’s a wonderful return to the roots of the game with a re-focus on horror, Humanity, and struggles with the Beast. It’s also directly targeted at adult audiences.

Recently, they have launched a Kickstarter for a new supplement called Cults of the Blood Gods, which is about vampire faiths. Like the undead themselves, they are bloody, atavistic, and frequently alien in their morality. Perfect for grimdark fans and a great thing to back this Christmas (or January).

1. Is Vampire: The Masquerade still wandering the nights of the new millennium?

It absolutely is. Ever since Vampire: The Masquerade 20th Anniversary Edition, interest in Vampire has been going up and up. The fifth edition of the game was released in 2018, and since then we’ve seen a book for the Camarilla, the Anarchs, and Chicago by Night.

2. What books will you need to have to really get your money’s worth from Cults of the Blood Gods?

You’ll only need the core book, but I recommend the Anarch book if you want to get a lot out of the Church of Set, or Chicago by Night if you want more insight into the nihilistic Cult of Shalim’s activities.

3. What can you tell us about the supplement itself?

Cults of the Blood Gods covers the myriad of vampire religions that exist in the World of Darkness. Worship of law, chaos, and everything in between, whether in search of enlightenment, gifts from a godlike master, or the chance to redeem oneself from the curse of being a vampire. It contains the Clan of Death – the necromancers such as the Giovanni and Cappadocians, who raise zombies and talk to the dead – and has a full playable story in there with characters you can play right out of the book.

4. Will fans of the Giovanni Clan like the changes you make?

I certainly hope so! The strongest element behind the Giovanni is the family structure, and the Hecata really play on that. The Hecata are an evolution of the Giovanni, taking in all the other clans and lines of death to create a functioning but highly dysfunctional, abusive, and incestuous family of necromancers.

5. What sort of rules material are here?

This book contains a plethora of new powers for vampires of many cults and faiths, from the Church of Caine being able to manipulate fire, to the Bahari being able to twist the earth to their will. The Church of Set can now remove their own hearts for safekeeping, while the Hecata have a bevy of necromantic powers at their disposal.

6. What sort of gains do Backers get for backing the project vs. buying later?

They can read the manuscript already! Just by backing you can gain access to the entire book before it’s released. Also, by backing the Kickstarter you help fund and gain access to further sourcebooks other fans will be paying for separately, such as the Trail of Ash and Bone.

7. Is Kickstarter the way of the future for tabletop games?

Different companies have different preferences, but all my uses of Kickstarter have been highly positive. Fans love an interactive way of backing their game and engaging with the creators, and Kickstarter campaigns enable and encourage that.

8. Do you have any favorite parts from Cults of the Blood Gods?

I love the entire book, but my favorite parts must be the chapters titled The Cult of Death and Undeath, and the Hecata. I love some dark arts in my games, and this twisted group of death-dealers is up there as my favorite playable clan. Who doesn’t like a necromancer or lich in their game?

9. Will any old favorites show up in the book?

Long-term fans of the game will recognize some character names and clan powers from previous editions, but likewise, there’s lots of new material in here too for those same established fans. I think there’s something for everyone in Cults of the Blood Gods.

10. What other products does Onyx Path have coming up that you’ll be involved in?

Everyone should check out They Came from Beneath the Sea! before the pre-order window on Backerkit.com closes, and it’s closing very soon! If you like your horror and science fiction to have a 1950s, cold war feel, please check it out! It’s a game that can be played with humor or Lovecraftian seriousness, and has had a fantastic reception to date.