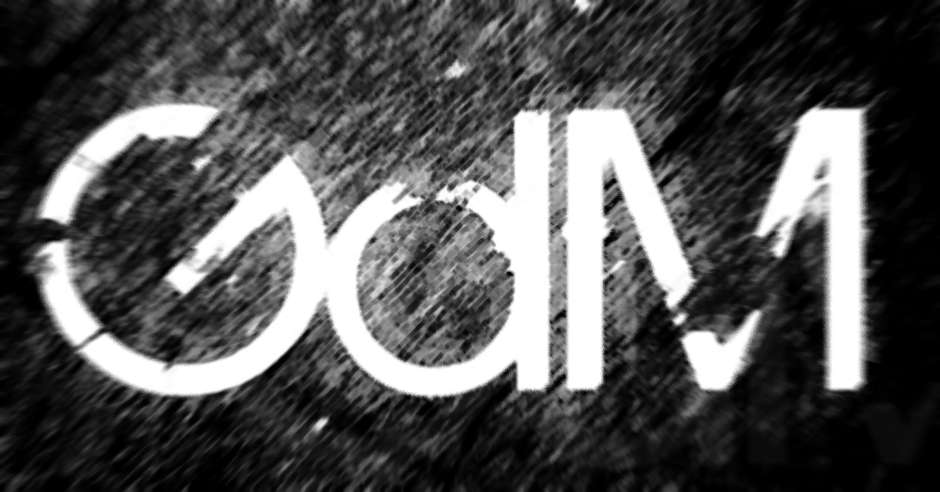 Burke ripped his revolver from his holster, diving into cover as his prey opened fire. Rounds sent chips of concrete flying through the air. Ducking round his cover, he blazed away until the hammer clicked home on an empty chamber. Not the best way to ensure a hit, but a good way to keep an opponent’s head down. Quickly he popped another clip into the pistol.

Taking a deep breath, he popped his head round the cover and straight back. It took less than a second, but that was all that he needed.  There were two men further down the corridor both armed with AK47 machine guns.

Many people who write about firearms don’t know much about firearms. Many probably haven’t even handled one. Many of them will have watched films, which look awesome but are not entirely accurate in their depiction of firearms and the effects that they have, and based their writing upon that. Unfortunately, many content editors and test readers will compound the issue by using the same firearms inexperience to affirm the author’s writing.

The above excerpt featuring Burke is full of errors, which I shall cover below.

The first mistake, and one which many people make, is mistaking rounds for bullets. As you can see from the picture below, the bullet is what is actually fired. The round is what houses the bullet, the propellant, and which is fed into the chamber. 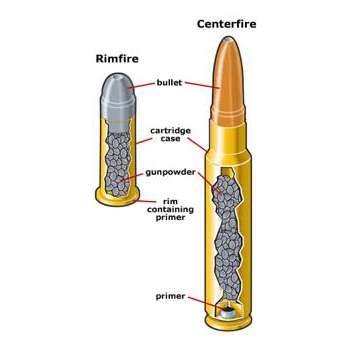 Parts of a round, also demonstrating the difference between rimfire and centre fire.

Now that you know what a round is, the line “Rounds sent chips of concrete flying through the air,” is now an impossibility, and also sounds faintly ridiculous.

Is that a revolver in your pocket, or are you pleased to see me?

The next common firearm mistake is to confuse a revolver with a pistol. Put simply, a revolver is the type of pistol most commonly seen in use by cowboys and Dirty Harry. There are a number of rounds (usually 6) set into chambers within a rotating cylinder. Every time the trigger is pulled, the cylinder rotates and another bullet is fired, the expended round staying within the cylinder.

A semi-automatic pistol uses a magazine (see the next mistake below) that has an internal mechanism that feeds a new round into the pistol’s chamber every time the pistol is fired. These pistols usually (depending on the calibre of the round) have at least 10 rounds in each magazine.

A semi-automatic pistol (left) and a revolver (right).

Another common mistake is confusing clips with magazines. The picture below shows a clip, used to reload a .303 Lee Enfield rifle. In order to load the Lee Enfield, a soldier places the clip into the rifle’s internal magazine, presses down and pushes the bullets into the rifle. The piece of metal (the clip) holding them is then discarded.

A bolt action Lee Enfield rifle with a clip being loaded into the magazine (left) and a magazine (right).

Pistols – specifically semi-automatic pistols – do not use clips. They use magazines. A magazine can either be a self-contained and temporary unit that is pre-loaded with rounds, as per the picture below, or which can be a permanent internal fixture in bolt-action rifles, and some vintage semi-automatic rifles such as the World War Two M1 rifle.

Another common mistake is soldiers letting magazine fall to the floor like confetti. Magazines are usually not discarded by soldiers but are placed into their webbing or combat gear so that they can be reloaded at a later point.

A lot of authors also tend to confuse assault rifles with machine guns, as in the introductory paragraph. An AK-47 is one of the most famous assault rifles in the world, but it is still referred to as a machine gun. In addition to this, authors and editors go on to confuse machine guns with sub-machine guns. This is understandable, as when someone is firing on full automatic at you, the distinction isn’t all that important.

An Assault Rifle is, as the name implies, a rifle. However, unlike bolt-action rifles which require the user to manually feed a round into the chamber by working the bolt back and forth (back to eject the expended round, forward to feed another round into the chamber), an assault rifle has to be capable of allowing the user to select semi-automatic, or automatic fire of some sort.

Semi-automatic means that the gun fires one round and sends one bullet towards the opponent every time the trigger is pulled, for as many times as there are rounds in the magazine, the spring in the magazine pushing each round up into the weapon’s chamber.

Fully automatic means that the gun fires rounds for as long as the user holds the trigger down, or for as many rounds are in the magazine or on the belt (for machine guns).

Most modern assault rifles also have what is known as a burst fire option. This means that the user pulls the trigger once, but the gun fires a set number of rounds. Usually three. This is because with every round that is fired, the barrel of the weapon rises, taking it further and further off target. Three round bursts give better stopping power, whilst keeping the weapon as accurate as possible.

Assault rifles also fire much larger calibre rounds, usually .223, .303, and 7.62mm, but even going up to .50 inch (such as the famous Barrett rifle). Because of their size and weight, the bullets in these rounds require a large amount of propellant. This in turn means that the bullets can be deadly at ranges up to and over a mile. They have a high penetrative power, which means they can punch through a car door as easily as a hot knife through butter. They will not ricochet off the metal or the windows in a shower of sparks. Those cops hiding behind the door? Unless it’s reinforced or armoured, they’re dead. That one-brick wall the detective ducks behind? Not enough. He’s dead, too. Nothing short of proper armoured plate (for vehicles), or body armour with either a Level III or IV rifle plate, or military specification body armour can stop these bullets in their tracks and have the person behind it still be able to operate. Even then, the body armour is only designed to stop a certain number of these bullets. The more that hit, the greater the chance of penetration. In fact, the original military spec body armour, Small Arms Protective Insert (SAPI), only required that it stop three bullets. Yes, three.

* An apparently bulletproof Mercedes, being shot by an assault rifle on semi-automatic. 1:30 onwards shows what it would be like to be inside a car when being shot at by determined attackers.

* Excellent video demonstrating the penetrative qualities of different shotgun rounds and different walls types. Scarily the “home defence” round blows right through a typical American house wall. This has serious consequences for any family members on the other side!

Even then, getting hit by a bullet is going to hurt. People are going to register a hit, they’re going to be bruised, maybe break a rib or three. If you’ve never broken a rib before, it causes excruciating pain. The break effects all forms of movement and makes breathing in a combat situation very difficult and very painful.

Pistol and Rifle round comparison chart.

The penetrative power is such that these bullets can, and will, go through a number of bodies. One particularly accurate, albeit stomach-churning and chilling, example can be seen in Schindler’s List where members of the SS line up a number of Jewish males in single file, and use one bullet from a Mauser K98 rifle to kill a group of them in one go. 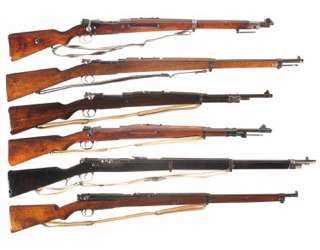 The picture below is of a machine gun. Machine guns don’t have selective fire. They are an infantryman’s favourite support weapon. These weapons will chew through a double-brick wall, and will fire for as long as the user holds the trigger down, or the ammunition lasts. They’re hard to aim accurately and are designed to put a large amount of bullets down into an area, suppressing – keeping their heads down – the enemy long enough for squad members to neutralise the threat. They are hard firearms to fire accurately from the shoulder and so usually come with a bipod (two little legs at the front that allow the user to rest the weapon securely). 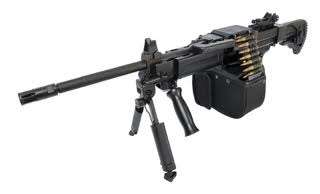 A sub-machine gun is an entirely different weapon. Initially designed for trench warfare, weapons such as the .45 Thompson sub-machine gun became famous. Sub-machine guns fire small-calibre rounds, the sort of round that is used in a pistol, most usually 9mm, .38in or .45in. They may have selective fire as per assault rifles, but what they’re useful for is sending a lot of bullets towards an opponent at a short distance. They don’t have the penetrative power of an assault rifle, which means that their bullets aren’t known for punching through bad guys and killing innocent civilians. This is one reason that the SAS adopted the Heckler and Koch MP9 sub-machine gun. The rounds were powerful enough to kill terrorists, but weak enough to stay in the terrorist and not kill hostages. With selective fire, they were also highly accurate. 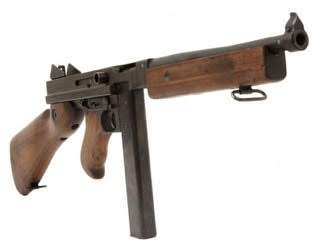 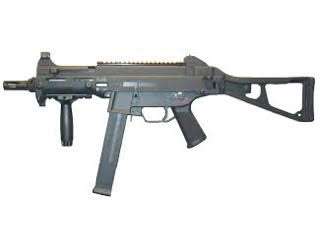 * Classic Uzi sub-machine gun being fired, some swearing, but makes it better.

To summarise: if you’re going to write about firearms, even the futuristic sci-fi versions of what we use today, do your research. If you’re not sure, ask people who do know about firearms. If you live in a country where you can go and fire a number of firearms, do so. Handling and firing a pistol, or a rifle, or any firearm is completely different to seeing them in films, or reading articles such as this. As soon as you put the stock into your shoulder, and take aim, you will instantly know how heavy firearms are, how they feel whilst snugged into your shoulder, or held in both of your hands. It really is a game changer and can save you from the ire of your readers!

Father of two beautiful daughters, Matthew has been reading and writing fantasy and science fiction since he first read the Hobbit at the age of 7. Deciding that he would ‘get published’ as part of 2013’s New Year’s resolution, Matthew has since been accepted for a wide range of anthologies, covering a number of genres. He has three favourite genres; alternative history – for which he writes the Blaise Maximillian series – LitRPG/LitFPS – for which he writes the Permadeath series – and mil-scifi, home to the Shadow Company series. He is also the author of the critically acclaimed ‘Practical Taekwondo: Back to the Roots’, which has been sold around the world.